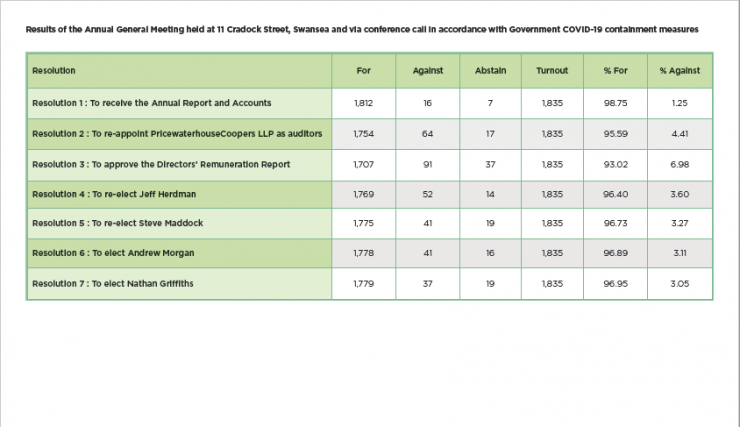 For the first time in its 97-year history, Swansea Building Society held its annual general meeting (AGM) behind closed doors, due to the Coronavirus pandemic – but we were able to use technology to ensure our valued members remained engaged in the process.

The Society usually hosts its AGM at the Liberty Stadium where approximately 70 members usually attend. This year, due to the ban on public gatherings, the event was held via a conference call, inviting members to vote by ballot paper and submit questions to the chairman in advance. The full recording of the session including those answers can be found on the links below.

During the event, held at noon on Thursday April 23, the Society announced that for every vote cast by members, it would donate £1 to its official charity: Wales Air Ambulance. In the end, with 1835 votes cast, it rounded the figure up to £2,000.

Two new board members were also officially voted onto the board at the AGM. Nathan Griffiths was voted in as the new finance director and Andrew Morgan, a chartered surveyor, was voted in as a non-executive director, replacing Roger Poolman retired last year.

Alun Williams, Chief Executive of Swansea Building Society, said: “These are unprecedented times and we have been forced to adapt. Despite not being able to hold the AGM in a physical form, members remained engaged in the process, casting votes and submitting questions in advance. I would encourage anyone to listen to the full transcript of proceedings.’

For a list of the questions asked in advance of the AGM and the responses seen, please click here

Posted by Swansea Building Society, Dec 16, 2020
It’s wonderful to be able to raise a smile at the same time as raising funds for very worthy causes. So, it’s great news, ...